As a European collector I can’t ignore this subculture of hardcore. And it also means a lot to me personally. That’s why I make this post. Since this is a “record-site”, I also want to put some records in this post. I’m not sure if these records have future but what I do know a 100% certain is that they have history and a very rich one.

There is a lot to say about vegan sxe bands especially about their convictions. But I won’t dig deeper in these convictions as you all know what they stand for. And I also made a post about this already. The vegan sxe bands have strong morals and ethics. The hard music vegan sxe bands make isn’t meant to be artistic. No, the music is made to make an undeniable statement for the out-crowd and also as an outlet for their own anger. Unknowing outsiders perceive their music and way of dancing as violent and threatening. But it is totally not supposed to be like that. Violent dancing and hard music is part of their culture and an outlet for their very sober lifestyle.

I respect and respected vegan sxe bands and kids a lot. They are very dedicated people and make an strong message. But unfortunately they are misunderstood by society and even by other hardcore circles.

Especially in the nineties they did a lot of work; like making zines and books, spreading flyer’s, organizing shows, making merchandise with messages on it, doing benefit samplers. I for one was very into vegetarianism and sxe but I never was an active activist or something in this sense. I also didn’t like their brainwashing attitude and fascism. What they put forward is good but one should become participant totally from within. Only this way it can stay. I mean, it should not be a trend or something that comes from the outside, like social pressure or doing as your friends do. If you become an activist in this way it will perish sooner or later. I guess this is a reason why it almost totally extinct nowadays.

Their hard line attitude often gets them into trouble also. The authorities see them as criminals but they are totally unaware about the ethics of the activists and the goals that they set. The direct actions are politically incorrect and there is a lot of money involved in the industries that they fight. It is very hard to live this way in society because you get repressed by elders and the unknowing. I guess this is also a reason why nowadays you almost hear nothing about the vegan sxe activists anymore.

Now about the records. For me it all started with the “Justice For The Enslaved” CD compilation. This is one of many benefit compilations that the world of vegan sxe has. It is a CD only release on Sure Hands Records from the UK. There are 7 bands on it with 2 songs each. 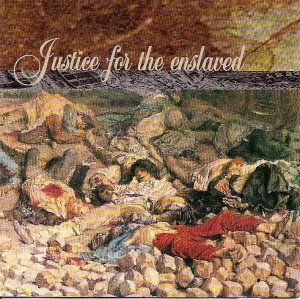 I like this compilation a lot and started searching after vinyl from the bands on it. Ofcourse I already knew Shorebreak since I am a Good Life fanatic and I already knew Clouded also from my youth.

Clouded is a Belgian band that is very hard to find because they have only put out one midCD/7″ and some songs on several compilations. Their 7″ is called ‘Inheritance’ and is on Genet Records. I have it on clear but there are some black swirls in the clear, so it could be a one of a kind hinting the existence of black copies also. A fun fact is that the drummer of this band now plays in The Setup.
This band is for me the highlight of this compilation. Not because it is a Belgian band, but because they make a very unique but recognizable vegan sxe sound.

Shorebreak is from Spain and are definitely inspired by Morning Again. They had a LP on Good Life Recordings which is pressed on several colors. I have the brown one (out of 200) and the pink/cream colored one of a kind. This is one of the nicest looking vinyl artwork I’ve ever seen. Proud to have it. But it exist on blue and pink also. Their music has very catchy melodies besides the passionate vocals and heavy instrumental poundage. A true gem…

I found this Dehumanize 7″ (to my great surprise) on ebay US. The title fully sounds “Restore The Sacred Order Of Nature”. They are an Italian band on the very focused vegan sxe label Surrounded Records from Rome. Italy was and is still very vegan sxe minded. Absolute cult 7″.

The fact that I didn’t find it in Europe where the most probably are, but in the US is surprising but this collector really took care of it. It kinda did me pleasure seeing that also Americans dig this stuff from Europe, a minority probably…

The last but heaviest band on this compilation is Reprisal. Also from Italy, they left their mark on the scene with killing hard riffs and vocals. If I were a kid I would have demolished my room when hearing this. This is their first LP on Good Life Recordings and in my opinion their best. It comes on sea-blue vinyl with only 150 pieces made. A interesting side note is that they are still playing vegan sxe but now together with members of Sentence; the band is called Awaken Demons. And have just released their second record on TRUSTKILL fame!! It is available on three vinyl colors and ofcourse on CD also. Check hardcore.gl where you can find everything Awaken Demons and even the vinyl of Reprisal and Shorebreak.