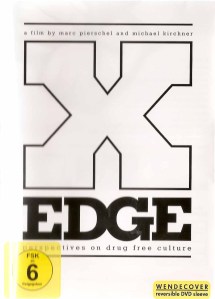 I just watched this. It’s a very interesting and well made documentary of Straight-Edge in all its aspects. Where a lot of info is given by interviews with very influential people out of all three decades of straight-edge:

The makers made interviews with the most influential people in the field of straight-edge. And show what they have to say in short fragments of the interviews. These fragments are fittingly added to the aspects of SXE they are discussing in a chronological way.

SxE evolved in a way where the action field has grown larger by the years. So they build up the documentary starting from the most basic convictions introduced by Ian McKaye (MINOR THREAT) and later on in the 80’s made popular by Ray Cappo and YOUTH OF TODAY.

The field of Straight-edge in the nineties expanded to political issues like Animal Rights, environmentalism and anti-consumerism. In the light of all this many straight-edgers became vegan or vegetarian also. So not only drugs were avoided. The best example of this expansion was the band led by Karl Buechner; EARTH CRISIS.

Also criticism towards straight-edge and hardcore itself arose. The machismo, militance and
violence were criticized especially by women, so also feminism is a part of straight-edge.

I need to say that it is very professionally done. The pre-order version DVD is numbered out of 500 and came with a poster, sticker and pin. Yes, that’s very limited. But you can still buy the DVD in a more common version, the one with the black cover.