In addition to Ezekiel’s post about the reissue, I wanted to give my vision upon this too. Not that it differs much from his point of view though. He’s absolutely right about the sound, it’s much better. More deeply and detailed vocals, guitars, drums and bass. It doesn’t happen too often that a remastering makes it better. I’d say there worked professionals on this thing.

Also couldn’t let the second color blue, go by unnoticed or unmentioned. I ordered both for sure. So here they are both in full glory. 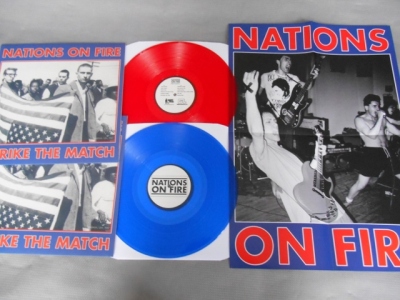 Ezekiel’s post was that of a fan, listener’s point of view. And I fully concur with it. What I wanted to add is that I think it’s so cool that the first H8000 vinyl reissue became a fact. It’s actually the first reissue on vinyl of a 90’s classic from the 8000 crew. I hope their is more to come… Let this inspire many other labels and keep the history preserved and carry on the fine Hardcore tradition to the kids who are mostly unknowing about it!!!

You can still get this awesome LP, poster and booklet package in Belgium on red vinyl (100 copies) at Good Life. And the blue vinyl (400 copies) in Germany from Kidnap music.