If Ray Cappo wore shirts of this band. And if Reaper Records uses the artwork of one of their releases. And if it’s important enough to reissue. Then I need to get it. These were my exact thoughts when I bought them. I did not know they came on colored vinyl. So when they were delivered and I checked them I was more than delighted.

The first one dates out of 1982 and is one of the most famous. Although the cover art is the most recognizable. And now is pressed on clear blue vinyl. What’s cool about this reissue is that it comes with explanations and writings of Kevin himself. A good concept since it is about music too. Putting the history and music in one package is the most effective I think.I will not repeat what is written up there. Therefore you can buy them. But after a first read, I can tell you it’s very interesting. About the non-racist ideals they spread and ofcourse it has nothing to do with Nazism. Also about the formation of the band and the never released recordings. Their first show in San Francisco together with some bigger names in Hardcore Punk. Very interesting to read and have, it draws a greater picture on the thin lines between and the misunderstanding about Skins and Hardcore.

The second dates from 1983 and is called, “Committed For Life”. Is now pressed on red vinyl and also comes with a writing from Kevin Seconds about the release.

Last but not least, comes the “Blast From The Past ep” that was released by Kevin Seconds own label Positive Force Records. Dates from 1985 and also Youth Of Today’s first ep called “Can’t Close My Eyes” was released by that label. Now pressed on clear gold vinyl. 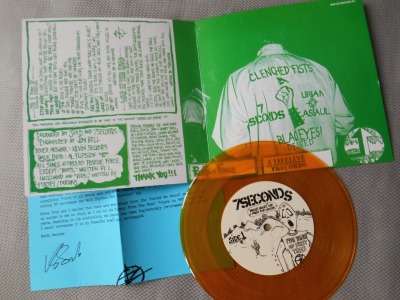 Here’s a shot of them all together:

This site uses Akismet to reduce spam. Learn how your comment data is processed.

A resume article about the three albums Length Of Time made in their first four years of existence. In depth analysis of some of their lyrics and some notes about the music. And a pressing information fun fact can't be missing.
Length Of Time

Sad Origin is a Belgian band from the Dendermonde area. They have released several titles at the end of the 90's. This LP called "A Double Edged Sword In A Triangle Of Emotions" is their only vinyl release. The LP was recorded in April 1999 and released by Genet Records. In this article you will read the lyrical analysis and comparisons to other bands and scenes.
Sad Origin “A Double Edged Sword …”
The One Thing That Still Holds True