“The Greatest Danger Lies In Man Himself”
The ‘music’ start off with noise, something we hear but can’t define. This stirs up the interest but also arouses fear and curiosity. Then an older man starts talking about his philosophical insights into ‘human nature’. According to his words, the greatest danger lies in man himself. Only other humans can destroy or endanger another  human nowadays. We here in Western society are deprived of the threat of nature almost completely, especially in our urban environments.

At the same moment, the acoustic sound starts to break through. The sound of the guitar reflects your thoughts, so that you can see clearly what you are thinking. It plays on your emotions, tears or laughter appear on your face. You  can’t keep cool and think neutral when he starts playing. Unless you are made of stone. The screaming vocals give a voice to the internal anger, frustration and pain you feel on a daily basis.

As the song “Parthenogenesis” ends, I’ve never felt such a force of musical en lyrical poetry within my mind for a long time. Emotional relieve is given with this music’s delivery, as well as enlightenment of the psyche. The song shines so bright that our mortal soul can only see its own woeful reflection. Awareness about the smallness of our being and the warfare between the greatness of our psyches. 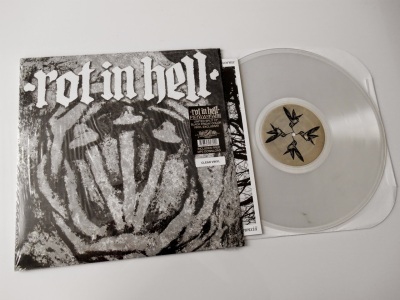 It surprises me not that the other band on this split LP is Dwid’s brainchild Psywarfare. “Psywarfare” is such a well found word for what does endangers people daily. The psywarfare between humans, whether they love or hate each other is the real threat. Or the psywarfare you inflict upon yourself. It’s crime, religion, betrayal, disrespect and all such human deeds that endanger people nowadays.

Everything you observe, think and feel passes through the psyche. But do not think that it pains me all this, I can listens to these three tracks over and over again. Solace and shelter given by this band.